Wow!  I never realized what a hit my chicken sandwiches were going to be.  I just put them out on Pinterest as a lark and it took off like wildfire!  Thank you for all the wonderful comments.  They really are great sandwiches and we probably have them about twice a month when it's grilling weather! Maybe I should start sharing  more things that I make!

Here's what I made for dinner Monday night.  I was in the mood for a casserole and found this one in 365:No Repeats by Rachael Ray.  I adapted it to work with what I had on hand it was delicious! I'll try to post the recipe as I made it.

Preheat the broiler to high and position the rack 8 inches from the heat.

Bring a large pot of water to a boil.  Salt the boiling water and cook the pasta until slightly undercooked--a little chewy at the center.

While the water is coming to a boil, preheat a large skillet over medium-high heat and brown the hamburger.  When the hamburger is almost finished, but still a little pink, throw in the garlic, jalepeño, and onions and finish cooking until the burger is browned and the onion is translucent.  Drain the grease from the skillet and mix in the cumin, coriander and chili powder.  Take off the heat or turn heat down low.

In a medium sauce pot (and you can do this while you're browning the hamburger), melt the butter and add the flour to it.  Cook for 1 to 2 minutes over moderate heat and then whisk in the milk. When the milk comes to a bubble, stir in the cheese, cilantro and parsley with a wooden spoon.  When the cheese has melted, stir in the tomatoes.

Once the pasta is cooked, drain it and add it back into the large pot.  Add the contents of the hamburger and all of the Cheddar sauce, and stir to combine.  Transfer to a baking dish, sprinkle with a bit more cheese if you wish, and place under the broiler to lightly brown.

It says it makes 4 servings, but with a salad, can easily feed 6!  It was another hit in our house!  I also think it would do well in a crockpot to take to a potluck.  Just add a bit more milk to the cheese mixture so it doesn't get too dried out.  I'm going to try it for the next potluck we have and we usually have plenty of potlucks throughout the year!

Oh.. and do you want pictures?  I hope so, because I took a couple! 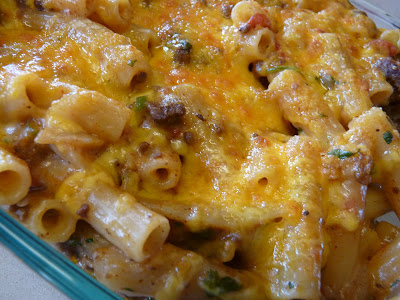 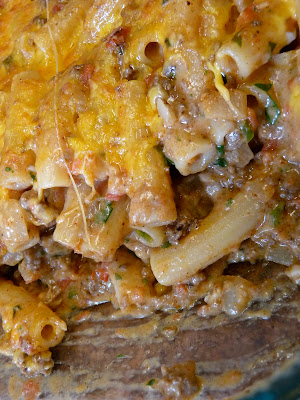