This morning Mike and I decided to play hooky from church and to take Nate and Rachael out for breakfast instead.  It's not something that we do very often, but for some reason, decided to brave the sub-zero weather and go to Cheap Charlie's for breakfast.  We had grand plans to do grocery shopping and get some errands run while we were out, except we forgot the list so that had to wait.

Cheap Charlie's is one of those hole-in-the-wall, greasy spoon café's that if you weren't a local, you would pass it by as looking sketchy. 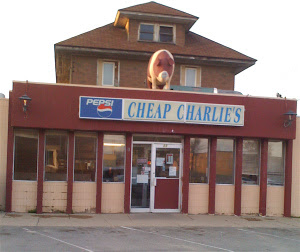 Anyway, after we were done, we came home to drop off the kids and get the shopping list.  Nathan and Rachael had no desire to go shopping and that was just fine with Mike and I!

Since Mike has started running three years ago, he likes to subscribe to Runners Magazine.  Ever so often, he'll rip out recipes that look good to him.  Sometimes we'll try them right away and sometimes he'll misplace them and find them later.  He had happened to find a recipe that he had ripped out of the August 2011 magazine and asked that I make it. It was fantastic!  Mike actually commented as we were eating that I should've played with this one.  What??  Played with it?  Then he explained that I should've taken pictures as I was making it because it was too good not to share.  Gee.. Glad he appreciates my efforts!

So, unfortunately, I did not "play with it" while I was cooking.  I did, however, take a picture of it.  I even dirtied another bowl to make it pretty!  I'm such a girl! 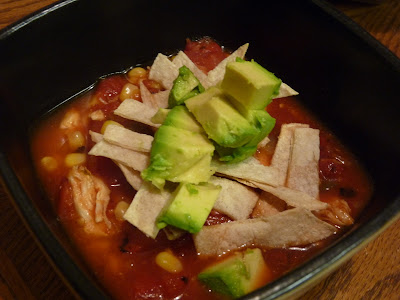 Not only is it pretty, it is pretty healthy!  The recipe comes from Runners Magazine, August 2011 and credited to chef, Rocco DiSpirito.

1 1/2 corn tortillas
2/3 cup low-fat, low-sodium chicken broth (I just used the whole can)
1 cup canned, diced fire-roasted tomatoes (again, I used the whole can)
2 chipotle chiles in abodo sauce, chopped fine
2/3 cup store-bought hot fresh salsa (I used medium, jarred salsa because it was what I had)
1/2 cup fresh or frozen corn kernels
1 cup cooked skinless chicken breast, shredded
salt and freshly ground black pepper, to taste
1/3 ripe Haas avocado (but only Mike and I like avocado so it wasn't divided equally)
1/3 cup chopped cilantro (and I just realized I forgot to use this.. Oops!)

Preheat the oven to 375ºF.  Line a baking sheet with parchment paper.  Cut the tortillas into 1/4-inch-wide strips.  Place in a single layer on the baking sheet; bake until golden and crisp, about nine minutes.  Combine the chicken broth, tomatoes, chiles, salsa, and corn in a medium saucepan.  Bring to a boil over high heat.  Turn the heat to medium-low and simmer for 8 minutes.  Shred the chicken and stir into the soup.  Season with salt and pepper.  Chill in the refrigerator if serving cold (we did not, too cold outside for cold soup!) Ladle the soup into four bowls.  Top each with avocado, cilantro, and tortilla strips.